New Delhi: Doctor G movie review in Hindi: Ayushmann Khurrana and Rakulpreet Singh starrer film ‘Doctor G’ has been released in theaters today. For the past few times, there are many allegations like lack of content on Hindi cinema, making only remakes. But when it comes to content, the expectations from Ayushmann Khurrana are always high. Ever since the trailer of this film, the audience had high hopes from Ayushmann’s film. Shefali Shah’s entry in the trailer also increased the craze among the fans. Ayushmann Khurrana’s Doctor G has once again brought a subject in front of the audience, which has probably never been touched on screen before. Come, let us tell you that how many numbers do they pass in the class of cinema, this Doctor G.

Story- The story of this film is about Uday Gupta (Ayushmann Khurrana) living in Bhopal who has done MBBS and now wants to take admission in PG. In PG, he wants to take orthopedic (department related to bones), but due to his low rank, he does not get a seat in ortho, he gets a place in gynecology, ie obstetrics and gynecology department. Uday wants to take admission in orthopedics at any cost as it is a subject suitable for ‘men’, while admission in gynecology makes him feel embarrassed. His senior in the same department is Fatima (Rakulpreet Singh), with whom he also falls in love. This is the only struggle of Uday and in this struggle his HOD is Dr. Nandini (Shefali Shah) who is facing in this department advising him to end ‘mail-touch’.

First of all, talking about the concept of the film, I would like to appreciate Anubhuti Kashyap sitting on the director’s chair, who has tried to bring this bold medical comedy drama on the screen. Actually Even though this film has been woven around the medical college, in which the hero wants admission in Ortho for men and not in Gynecology for women. But this story tells the thinking of men towards women and the attempt to divide many works and professions into ‘man-woman’. In one scene, the hero of the film is asked what is the problem in taking ‘gynec’. So he says, ‘I have seen boys playing cricket and girls playing badminton in my locality. Now how can I play badminton man…’ Just like this society has divided a lot into ‘for women’ and ‘for men’.

Ayushmann Khurrana is very good in his character in this film as well. For years, in the name of romance, ‘a boy and a girl can never be friends’, it has been shown for the first time in the cinema that ‘just as two boys can be friends, girls can be friends, so can a boy And girls can also be just friends. Many films including ‘Pyaar Ka Punchnama’ have tried to establish the ‘truth’ that a girl befriends a boy ‘to fulfill her unfulfilled needs from her boyfriend sitting far away’. But this film tries to break this old concept of yours. But the drawback in this film with this very important and important concept is that it becomes very slow in doing both these things. Especially this second case.

From the very first scene of the film, you get an idea that this hero is such a man, for whom it is difficult to understand a woman’s point of view. But this thing has been repeated so many times that you start finding Uday more correct. There are many such scenes in this film, when you feel that maybe something else will be said, something will be said, but the scene ends. Know with a thought for years Uday can’t miraculously understand everything by playing just one badminton. Ayushmann Khurrana has been putting very bold subjects and stories on the screen even before this. Whether it is a film made on homosexuality or masculine weakness, the comedy and entertainment factor remains very high in all of Ayushmann’s films. Perhaps this is the reason why the audience does not feel bitter about even the bold topics fed by them. But In Doctor G, you will rarely find moments where you can hold your belly and laugh. It is a medical-comedy-drama but in this the medical and drama have become too much and comedy is missing. The first half of the film is still light but in the second half the story completely turns around. The film also becomes a bit heavy in the second half. 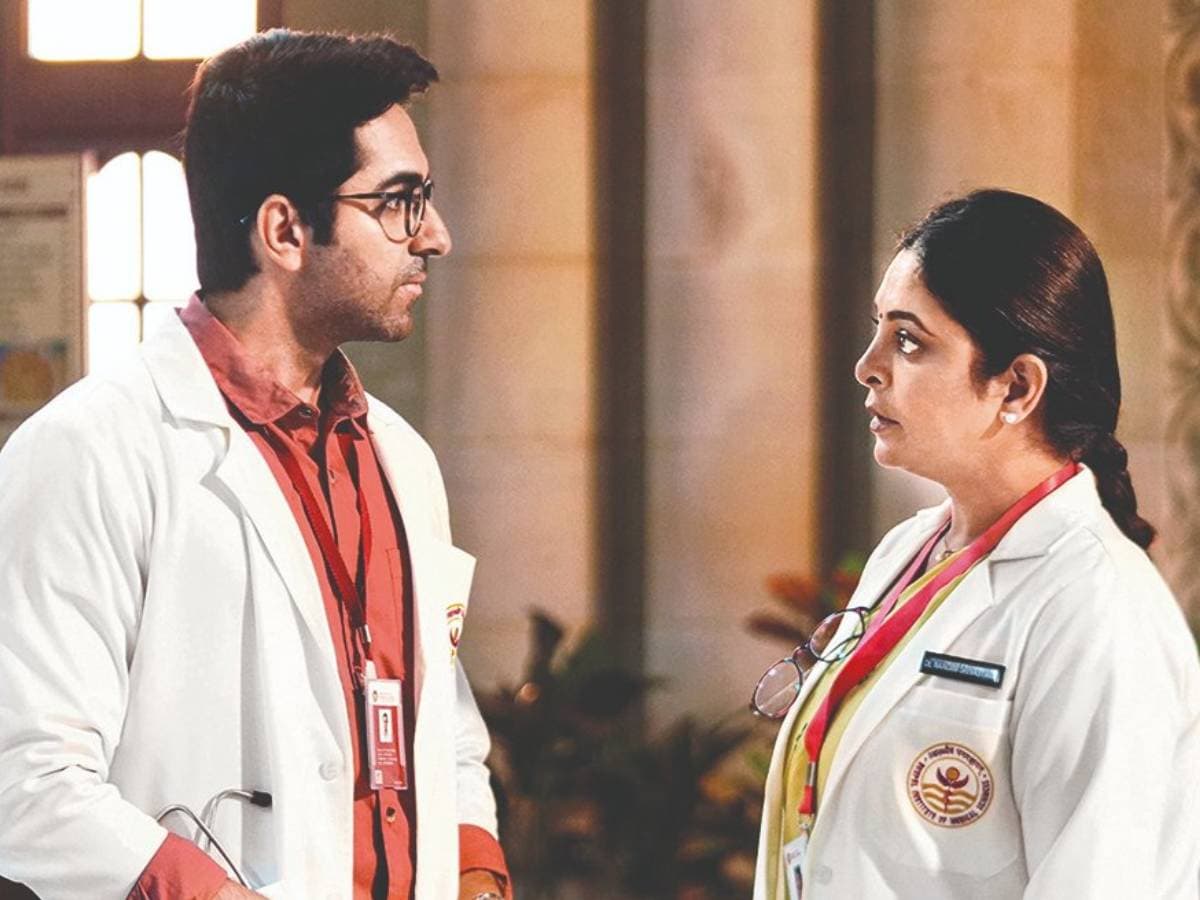 Shefali Shah has become the head of the gynecology department in this film.

Talking about the performance, as always Ayushmann Khurrana is completely fit and strong in his character. Often the hero of our films keeps a lot of drama of emotions in his backstory even after doing wrong things, so that he never looks wrong even after being wrong. But with the shortcomings in his character on the screen, this actor has a wonderful art of making him a ‘hero’ and connecting with the audience. Shefali Shah has been tremendous in the role of HOD. His dialogues, his style is superb. Whenever Shefali has come on the screen, you will not be able to feel the presence of anyone other than her on the screen. On the other hand, Sheeba Chadha’s character in the character of Ayushmann’s mother has been fun. Rather someone’s presence in the entire film will make you laugh, then it is Sheeba. Rakulpreet looks good in her scenes.

Doctor Ji is a slow story with a great concept, in which the actors have left no stone unturned to deliver. Just this story was not told in that sharp way, as much as it should have been. You must watch this film once on the screen. 3 stars to this film from my side.

The fortunes of these actresses shone overnight, some are ruling Bollywood, some have disappeared