Said India landed with at least 6 bowlers if not 7

New Delhi. The Indian team came out to play in the first match of the 3-match ODI series against New Zealand on Friday. The host team won the toss and elected to bowl first and batting first, the Indian team managed to score 306 runs for 7 wickets. Shreyas Iyer, Shikhar Dhawan and Shubman Gill scored half-centuries. The partnership of New Zealand wicketkeeper Tom Latham and captain Kane Williamson overshadowed all three innings. By achieving the target of victory at the loss of just 3 wickets in 47.1 overs, New Zealand took a 1-0 lead in the series.

After India’s defeat against New Zealand, reactions started pouring in on social media one after the other. After the match was over, former India opener Wasim Jaffer praised the New Zealand team in a tweet and congratulated them for the win. As soon as Jaffer tweeted, the former England captain took a dig at him. Didn’t write anything to praise New Zealand but definitely criticized Indian bowling.

Jaffer wrote after the match, New Zealand team you played very well. Chased the target of 300 runs in such a way as if only 270 runs were to be scored. Williamson batted class as usual but Latham stole the show. It is not easy for any opener to bat in the lower order and achieve success. The Indian team fed only 5 bowlers in this match and here they made a big mistake. 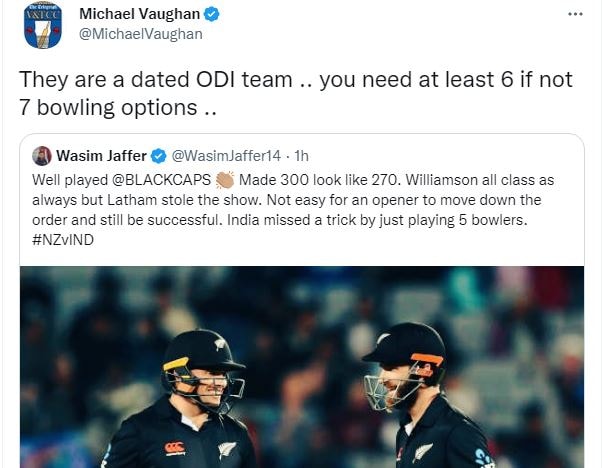 Former English captain Michael Vaughan wrote on this, they (New Zealand) are the best ODI team at the moment, you will need at least 6 bowlers, if you don’t have 7 bowlers.

Virender Sehwag made a big prediction about ODI and Test cricket, said a big thing

VIDEO: Stark’s ball waving in the air became more dangerous after eating the tappa, something like this happened to the stump